After Argentina scored their second goal against Uruguay in the World Cup Final in the 37th minute to take the lead, the Uruguayan captain, Jose Nasazzi, complained to referee John Langenus that Guillermo Stabile and Manuel Ferreira were offside. When the Belgian official awarded the goal, after consulting with his linesman, Nasazzi ‘continued his protest in the referees dressing room at halftime etching a diagram on the fresh plaster.’

This account can be found in the 1998 publication, A History of the World Cup, Volume 1, The Jules Rimet Years, by authors Ken Knight, John Kobylecky and Serge Van Hoof. They claim that ‘this drawing remained scratched into the wall for years as a ‘’national treasure’’’. Inferred in this last statement is that this drawing is no longer etched in the foundations of this dressing room in the famous Estadio Centenario.

Unfortunately, the authors do not account for their source or sources from which this story is taken, and whether this was a primary document or a secondary one. Assuming they have recounted this accurately, without examining their materials we are unable to determine the credibility of the information from which it came.

It is perhaps appropriate to analyse these statements in two parts because it may provide clues to categorise their sources. So for instance, the first part where Jose Nasazzi follows the referee into his changing quarters and illustrates his protest in the wet plaster, hints strongly that this story came from an eyewitness. In trying to determine who this witness may have been we can assert with confidence that present in that room was the Uruguayan captain, Nasazzi, and the Belgian referee, John Langenus. It is also likely that also present were the two linesmen, Henri Christophe, from Belgium and the Bolivian, Ulises Saucedo. Are any of these four men responsible for promulgating this story? Was this recorded at the time or documented later to another chronicler based on the testimony of someone who was there? What is known is that John Langenus wrote about his experiences in Uruguay in his biography published in the 1940s, to which we will return to shortly.

But all this depends if the story is true. It is possible that some contemporary, who was present at the first World Cup, exaggerated the event or invented the story out of whole cloth for dramatic effect? There is at least one example of this after the commencement of the World Cup Final. The Argentinian newspaper, El Litoral (31 July 1930), reported how a rumour was fed back to the Buenos Aires press corps, that the Argentinian centre-half, Luis Monti, had come to blows with his Uruguayan counterpart and bitter rival, Lorenzo Fernandez, which resulted in the latter's death. But this was easily proven to be false because of the lack of detail where this was supposed to have occurred and that the unknown whereabouts of Fernandez were due to him having departed Montevideo quickly after the final. Some hack had tried to exploit the enmity between the two players to create a sensationalist headline to sell papers.

There are other similar examples. The referee John Langenus recalled that his compatriot, Henri Christophe, was surprised to learn that he had apparently done an interview with a local journalist. The French player, Augustin Chantrel, writing a dispatch for the weekly sports magazine, Match (29 July 1930), noted that the slightest rumour caught by a journalist would end up as a long article.

But all this would only make sense if the claim that this diagram became a national treasure is not true either. And this comes to the second part of the statement. That the authors state that ‘this drawing remained scratched into the wall for years’ suggest that they took the information from a secondary source. And if this ‘treasure’ exists or existed then it should be more commonly known.

It would be reasonable to assume that Nasazzi’s diagram, if the story is true, was his interpretation of where both Stabile and Ferreira were positioned in relation to the Uruguayan defenders the moment the ball was played. In terms of World Cup history, Nasazzi’s etching would be an important part of telling this story. In a sense, it would also be an early form of the way experts and pundits today use modern technology to analyse controversial incidents on the football pitch, replaying an incident and using touch screens and imaginary lines to determine if a player was offside or not.

It is only possible to imagine Nasazzi’s diagram by the descriptions written by reporters of Argentina’s second goal. Photographs do little to help as they only portray the ball hitting the back of the net. It may help to understand that during this period, as per the 1925 offside rule amendment, a player was deemed to be offside if he was positioned in front of the second-last defender. In other words, two defenders were needed between the attacker and the goal, when the ball is played forward, to be onside.

In reviewing some of the contemporary reports regarding the second goal it appears that only the Uruguayan chronicles argue that the goal was offside. This is none more illustrated by the official report Album Primer Campeonato Mundial de Football when Luis Monti ‘placed a high pass forward, and when Nasazzi was about to return it, he slowed down seeing that both Ferreyra and Stabile were behind him, in offside. The Olympic captain raised his hand, but the referee, placed in a bad position, was not able to see the infraction. Stabile and Ferreyra easily received the ball. With no rivals other than Ballesteros, they made a firm advance and Stabile kicked a high shot that beat the goalkeeper. Before acknowledging the goal, the referee asked linesman Mr Christophe, who did not find anything unusual and then pointed out to the middle of the field. Nasazzi protested, while the Argentineans, showing a natural joy, were hugging one another.’

Montevideo’s El Diario also describes Stabile in violation of the offside rule, while the Buenos Aires newspaper, La Nacion (31 July 1930), makes no mention of it and describes the striker slipping between two defenders before placing a ‘strong shot’ past the keeper. There is no description of an Uruguayan protest.

The referee, John Langenus, in his 1943 biography, En sifflant par le monde, notes that ‘the second goal of the Argentines appearing offside to the Uruguayans. Always the same question: the moment of the pass and the and the reception of the ball. A footballer understands this. My linesman Christophe was persuaded, like me, that the contested goal was regular.’ Interestingly, Langenus makes no mention of Jose Nasazzi following him into the dressing room and creating this diagram.

What can we know to be fact? It is clear from Uruguayan sources that the home team protested Stabile’s goal and that this was led by the captain. This at least makes it possible that Nasazzi continued his complaints into the locker room.

And what of the wet plaster? When the tournament began on July 13th, the Estadio Centenario was yet unfinished. Early matches were played at the El Gran Parque Central, home of Club Nacional, and the Estadio Pocitos where Club Penarol played. The Centenario officially opened on July 18th, with the host Uruguay defeating Peru 1-0. Is it possible that the plaster was still wet some twelve days later?

What we do know is that work continued on the new stadium after its inauguration. According to the book Four Weeks In Montevideo, by Hyder Jawad, which is based in part on the diary kept by an Uruguayan fan, named Antonio, who attended nearly all the games, he mentions that work on the stadium was still in operation some three days after Uruguay played Peru. Therefore, it is entirely possible that finishing touches were made to the stadiums interior leading up to the final, thus explaining the wet plaster.

If such an etching had become a ‘national treasure’ it would be reasonable to assume that there would documentation. A search of almost a dozen or so contemporary reports from Argentina and Uruguay yielded no results. However, access to all the periodicals and newspapers from these two countries has not been possible, so it's entirely possible the evidence exists.

In 1980, the Uruguayan newspaper, El Pais, published a magazine titled ‘Libro de Oro, ''Bajo un bosque de banderas...''’, which was a commemorative piece celebrating the 50th anniversary of Uruguay’s World Cup victory and which included interviews with some of surviving members of the Uruguayan squad. There is no mention of this apparent ‘national treasure’.

As the authors of The Jules Rimet Years suggest this diagram can no longer be found on the wall of the referee’s dressing room. So what happened to it? Has it been lost to us? If anybody has any information please get in touch by leaving a comment below or contacting me via twitter.
Posted by Dean Lockyer at 16:13 No comments: 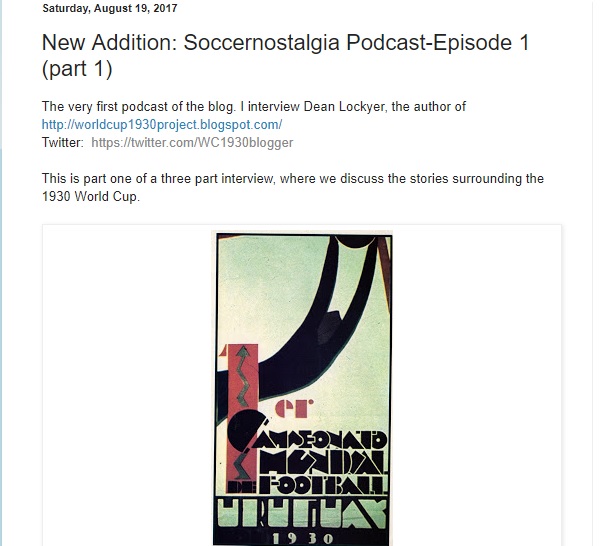 This is part one of a three-part podcast I did with Shahan Petrossian from the Soccernostalgia blog on the subject of the first World Cup. In order to make this interview as different as possible from the podcast with the Yesteryear Footy Pod, we had agreed upon a different format where we discuss each of the individual teams in the order in which they finished in the rankings i.e. from 13th to 1st. This would me allow to include topics not discussed in the previous aforementioned podcast. In part one we discuss Mexico, Bolivia and Belgium.

Beginning with Mexico we discuss the teams' long travel itinerary, anecdotal evidence with regard to the limited education of some of the players and their training regime on board the SS Munargo. Other items include the low expectations of this very young team and of the motivating tactics of their coach Juan Luque Serralonga. There is also a brief focus of one of Mexico's star players, Juan Carreno, and his on and off the field antics. We then review Mexico's matches against France (which include the 1st World Cup goal); Chile (1st World Cup own goal) and Argentina, a game in which there are some discrepancies on how many penalties were actually awarded.

Moving on to Bolivia we discuss the general lack of information that has been published on this team. And how only recently has new information come to light on their pre-World Cup preparations and journey to Montevideo which coincided with an ongoing coup in the Andean nation. We then take a closer look at Ulises Saucedo, the coach and World Cup referee and his possible connection to Arsenal. We then discuss the reasons why Bolivian players wore letters on their shirts which spelt out 'VIVA URUGUAY' before moving on to their matches against Yugoslavia and Brazil.

We then conclude with Belgium and their journey to Montevideo and how much of what we know comes from the accounts given by the Belgian ref, John Langenus and goalkeeper, Arnold Badjou. Despite their training regime on board the SS Conte Verde some of the players gained weight. We also look at Belgium's selection issues, especially with regard to their star man, Raymond Braine, and how this left them lacking in their attack and as we discuss their defeats against the United States and Paraguay, this affected their ability to be potent in front of goal.
Posted by Dean Lockyer at 15:28 No comments:

This overview is to help facilitate the navigation of this blog. Below you will find the match schedule and results of the all the 1930 Worl...