This is an English translation of the match reports that appeared in the Spanish newspaper, El Heraldo de Madrid, on 14th July 1930, from the Associated Press, the press agency from the United States. The authors of the article are anonymous but are most likely South American journalist working on behalf of the American company. You can read the original match report in Spanish here. I have used google translate for this document and therefore may not be perfect in its translation. I have tried to keep to this translation but where there may be confusion I have offered my own interpretation.

THE WORLD CHAMPIONSHIP OF FOOTBALL:

MONTEVIDEO 13.- In the match for the football world championship played yesterday afternoon in the Stadium of this capital, between the teams of France and Mexico, the first one won by four goals against one .-- Associated Press

MONTEVIDEO 14.-With attendance of numerous public have begun the eliminatory matches for the world soccer championship.

They play, in first term (game?), the American and Belgian teams, the first of which has developed magnificent game, winning by three to zero, and showing a greater knowledge of the technique than its opponents.

The Belgians played a very fast game, which was, however, counteracted by the Americans, who shot very well, excelling in both times the extreme (winger) and the right inside. The defenses of both squads were deficient and only the good game of the Belgian goalkeeper stood out.

In the first half the forces were leveled, but since the second half began the American team showed a great super quality, which justified its triumph from three to zero, also standing out in this time the extreme (winger) and the inside right. In this second part (half) the Americans scored the goals for the far left, Mac Ghee, in brilliant and fortunate plays, being very applauded.

He also played very well in this time the right half. In general the defenses of the teams were bad and the forwards played well, being observed in the course of the game that neither of the two teams knows how to finish the plays.
At the end of the match, the critics who attend the tournament and who attended the Amsterdam Olympiad said that the current Belgian team is much lower than the one that played in that in 1928.

It can be predicted that the Paraguayans, who with the Americans and the Belgians form the fourth group, will easily defeat these two opponents and will be classified as winners of the series, since they surpass both teams.

The game between Americans and Belgians was developed without incidents or brusqueness, and the audience was produced correctly. Twenty thousand spectators attended.


In another field the eliminatory match between France and Mexico was also played, which was developed with very little assistance from the public. It would not exceed four thousand the total number of spectators, as the fans preferred to witness the United States - Belgium meeting, which had aroused greater interest in the nature of the competitors.

Both the Mexicans and the French played with great enthusiasm, although without good technique, although the French team proved to be far superior to the Mexican and have greater knowledge of the game.

The French superiority was evidenced in the final score, which threw four goals in favor of the French for one on the Mexican scoreboard, despite having played the French team almost the entire game with only ten players, because the team goalkeeper was injured, Thelpot (Thepot), shortly after having started the game, being replaced by the left half, Chantrel.

In general the game lacked good plays, and at times was very violent, becoming denaturalized the character of the meeting by the fury with which both teams developed their game.

Both the French and the Mexicans proved to be technically very inferior to any South American international team, especially the Mexican team, which played a completely primitive game, acting with absolute lack of any organization, which they tried to replace with a waste of enthusiasm.

Of the Mexican team the only one that was good was the goalkeeper, Bonfiglio. For the rest, the team has no defenses or attack line. The French were equally weak in the defense, owing their triumph to the work of the strikers, who, although not very regular, were outstanding and brilliant compared to the Mexicans, and gave them the victory.

However, the extremes (wingers) stood out in the winning team.
Associated Press

Posted by Dean Lockyer at 18:35 No comments: 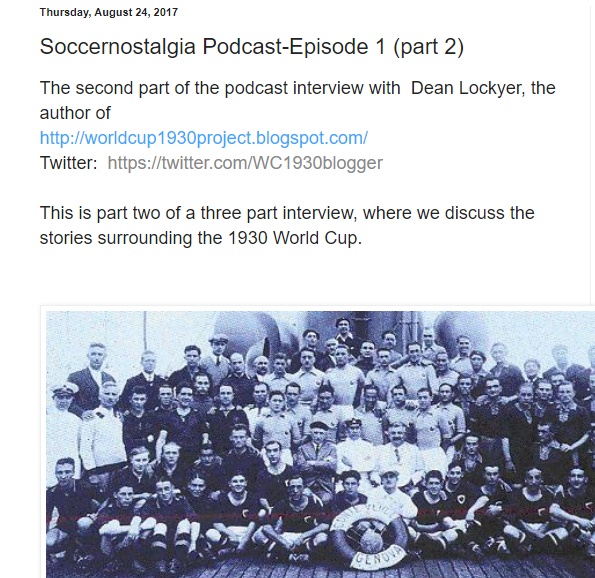 This is part two of a three-part podcast I did with Shahan Petrossian from the Soccernostalgia blog on the subject of the first World Cup. You can get a summary and link to part one here. In this episode, we discuss the national teams of Peru, Paraguay, Romania, France and Brazil.

Beginning with Peru, we discuss the career of their Spanish coach, Francisco ‘Paco’ Bru, as well as his demands to have control of the selection process. We then move onto the team's training and travelling itinerary to Uruguay before a larger discussion of the role of race and class in Peruvian football in this period. We conclude with a discussion and analysis of the team performances against Romania and Uruguay.

We then briefly talk about Paraguay, and like Bolivia, there is very little contemporary documentation about the teams' preparation and secondary sources are also scarce. We touch upon the career of their Argentinian coach, Jose Duran Laguna, and discuss their performance at the 1929 Copa America which raised expectation upon the team in Uruguay. We then discuss their disappointing defeat against the United States as well as their narrow win over the Belgians.

We then turn our attention to Romania as we try to determine exactly the role played by the country’s monarch, King Carol, who is largely credited with the Balkan country’s participation in the first World Cup. How much of it is actually true as their appears different variations of the story? We then briefly analyse their performances against Peru and Uruguay, as some of it had been previously covered in the Peru section of this episode.

Next, we focus on the French and how Jules Rimet struggled to convince the French Football Federation to make the trip to Uruguay. There are references to some anecdotal stories from members of the delegation in their reports home. We learn how they performed admirably in their three matches and how perhaps the tournament schedule took a toll on the fitness of the team. Then there is a focus on the life and times of the French captain, Alex Villaplane, and his ultimate decline into criminality and collaboration with Nazi’s and his eventual execution by the French resistance in 1944.

In concluding this episode we focus on the Brazilians. We take a look at the controversy around the selection process which manifested in the rivalry among the footballing authorities of Rio de Janeiro and Sao Paulo. This resulted in the withdrawal of the Paulistas players from the squad. There are then some anecdotal stories around the teams travels to Uruguay before we take a look at the fall out from their shock 2-1 defeat to the Yugoslavians and their subsequent elimination from the tournament.
Posted by Dean Lockyer at 16:27 No comments:

This overview is to help facilitate the navigation of this blog. Below you will find the match schedule and results of the all the 1930 Worl...